Do you have a leaky basement? 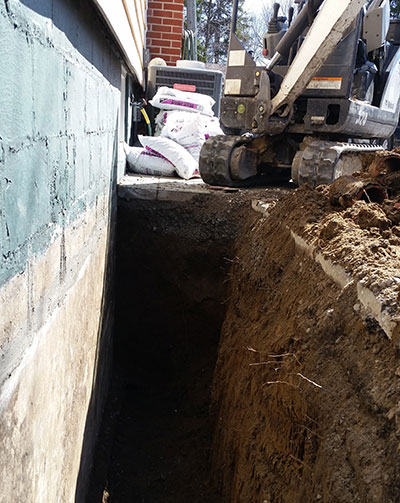 Barrie is a city and manifesting local centre in Central Ontario, Canada, located on the coasts of Kempenfelt Bay, the western arm of Lake Simcoe. The city lies geographically within Simcoe County, however it is a politically independent single-tier town. It is within the traditionally substantial Huronia area of Central Ontario, and is part of the Greater Golden Horseshoe, a largely populated and industrialised sub-region of Ontario. As of the 2016 census, the city’s population was 141,434 making it the 34th largest in Canada in regards to population correct. The Barrie census city (CMA) as of the same census had a population of 197,059 residents, making it the 21st biggest CMA in Canada. The city itself has seen substantial development in recent years due to its emergence as a bedroom community for Toronto. The cost of housing and robust task market perhaps add to a Toronto purchaser’s appeasement with Barrie. GO Transit provides daily service to and from the Greater Toronto Area from two stations in the city. Barrie lies 85 kilometres (53 mi) north of Toronto, 355 kilometres (221 mi) northeast of Detroit and 335 kilometres (208 mi) west of Ottawa. This represents the city’s historically useful and highly centralised situation, supplying an ease of access to major centres and airports across the region.

We attack your basement waterproofing from the outside and the inside. Our comprehensive approach ensures the best possible results in keeping the bottom floor of your home dry and intact.
Our methods include both active and preventative waterproofing steps, and we fix any damaged spots in your walls or foundation. Then, we cover the surfaces with a waterproof seal.
In situations that need more attention, we might need to install a sump pump or weeping tile to extractor redirect water seepage.
We also offer city-subsidized backwater valve installations. These products prevent sewer water from flooding your home during or after massive storms, for example.

Get a Free Quote

Owning a home is expensive, and balancing savings for disasters with general upkeep can be overwhelming. It’s crucial to have access to service providers you can trust, like our experienced professionals.
Our plumbers are all licensed and fully insured. Their work exceeds industry standards, and their experience ensures they will provide the best possible solutions for you.
If a mistake or accident occurs, you are not responsible for the damages. We have complete confidence in the skills of our team, and our insurance supports the work accordingly.

"I Would Recommend MT Drains For Waterproofing"

We had the pleasure of working with Pavel and his team of waterproofers. Our basement wall crack was causing a leak in the basement. Pavel came the same day to investigate the issue, the guys did an amazing job and it like there were never here. I would recommend Pavel for waterproofing and plumbing to everyone.

Get Help Waterproofing Your Basement Foundation

If you are debating between adding exterior or interior basement waterproofing to your home, it’s better to consider a combination approach. By combining efforts on both sides of your walls and foundation, you have the best chance of keeping your home dry and mould-free.
Internal waterproofing involves covering the inside surfaces of your external walls with a water-resistant layer. The process is easiest in an unfinished basement, but still possible for most homes.
External basement waterproofing takes similar steps. First, we seal any cracks or breaks in the walls. Then, we create a waterproof barrier between the groundwater and your home.
Sump pumps, weeping tiles, and related methods of water removal work equally well inside and outside the home.

 5/5
Cameron from Richmond HillTrusted Pros
Read More
We had a leak in the corner of our basement. Pavel examined the area and provided some tips on how to inspect and find the cause. After finding and locating the root of the problem, he provided me with a reasonable solution and reasonable estimate of cost. The work his crew did was professional and clean. I highly recommend Pavel, for I find him professional, reasonable, responsive and cooperative.
Diane from TorontoTrusted Pros
Read More
During the heavy rains in May, water seeped into my basement. I consulted many companies specialising in waterproofing basements and installing back valves. As the 2 jobs involved digging a deep hole, it seemed sensible to choose a company that could do both. The crew arrived promptly and quickly set to work. I had removed all the plants from the working area, so they could start digging immediately. Tarps were spread out to hold the earth excavated and after 1 day the back valve had been installed and trenches dug. On the 2nd day, again, after prompt arrival, the crew quickly set to work.They even dug up a plant that I was concerned about and replanted it later. The work was completed on the 2nd day and it was a large area to dig. I would recommend this company based on my observations of the work they did at my home.
Timothy from TorontoHomeStars
Read More
Pavel and his team did an excellent job in helping me with my leaking basement. They were very responsive and provided honest advice. Two days work was completed in one day and they took great care in keeping the area clean, returning it to its original condition. I would highly recommend MT plumbing!
DP From MarkhamHomeStars
Read More
Pavel was very knowledgable and diagnosed the issue very quickly. The work was completed promptly as agreed. The crew came in and completed the work professionally . Pavel made sure to check everything went well through out the work. I would not hesitate to recommend MT Drains and plumbing to any of my friends.
Thiai from TorontoHomeStars
Read More
I selected this company from several estimates because it seemed to offer a good combination of experienced, professional knowledge and reasonable pricing. It more than lived up to expectations, with work completed exactly as specified, time lines met, custom made window wells designed as requested, and clear communication throughout. I would definitely recommend this company.
Previous
Next
Contact Us

Even well-maintained houses experience problems. Foundations tend to crack or damage after years of supporting your home in a damp, underground environment.
Our team will find and fix any cracks or problem areas as part of our basement leak repair services. Then, we will offer suggestions to protect your foundation from future repair issues.
Weeping tiles help to pull water away from your floor and prevent any pooling in the area, for example. Your foundation remains drier and less prone to cracking or breaking. It also prevents water seepage.

Get a Free Quote

Even if you don’t have cracks in your walls or pooling around your foundation, your home may still benefit from waterproofing the basement. The ground naturally holds water, so anything below the surface regularly sees moisture.
The dampness will seek through your walls and cause mould or mildew. It could also lead to long-term health issues for your family or break down the structures of your home if left unabated.
Keeping the moisture from entering your home saves money and convenience. You won’t have to repair or replace the damages that result from flooding or seepage. 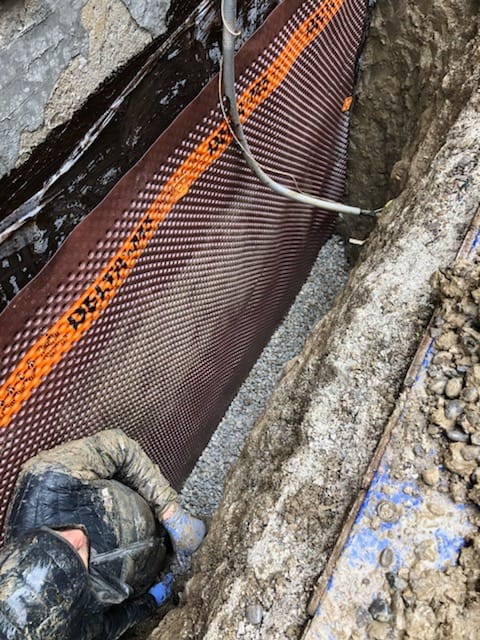 Even the basement with the most solid construction and best waterproofing needs help to keep water outside where it belongs—it is where a sump pump comes in handy.
Sump pumps pull water out of one location and move it to another spot further away from your home. We can install these helpful devices outside around your house to prevent puddles or in areas that flood routinely.
The sump pumps are an ideal part of any comprehensive waterproofing plan. Based on your needs, we will either recommend a durable model with a long-lasting battery or a smaller version that’s great for more temporary jobs.

Why Choose MT Drains for your Basement Waterproofing Project?

MT Drains & Plumbing has served Barrie for almost 30 years. Our experience in the area provides extensive, first-hand knowledge of the unique plumbing issues in the city.
For example, we know the in’s and out’s of the city’s backwater valve subsidy program and why these products are such a vital part of a full waterproofing system for your home.
Our plumbers are also experienced, licensed, and insured—qualifications that not only enhance the quality of our work but provide peace of mind that your home is in good hands.

Get a Free On-Site Estimate

If you’re concerned about your wet basement in Barrie, reach out today for a FREE visit from one of our expert plumbers. We’ll talk you through the problems on your property and discuss your options to remedy the situation.
The best time to keep your basement dry and free of water damage or mildew is now—before you’ve had any catastrophic flooding. We help you take preventative measures for a dry and healthy home.
If you already have a flooded basement or crawlspace, we can help. We’ll first stop the issue and prevent it from getting worse. Then, we’ll suggest options to avoid similar disasters in the future.
We look forward to meeting you.
Get Started 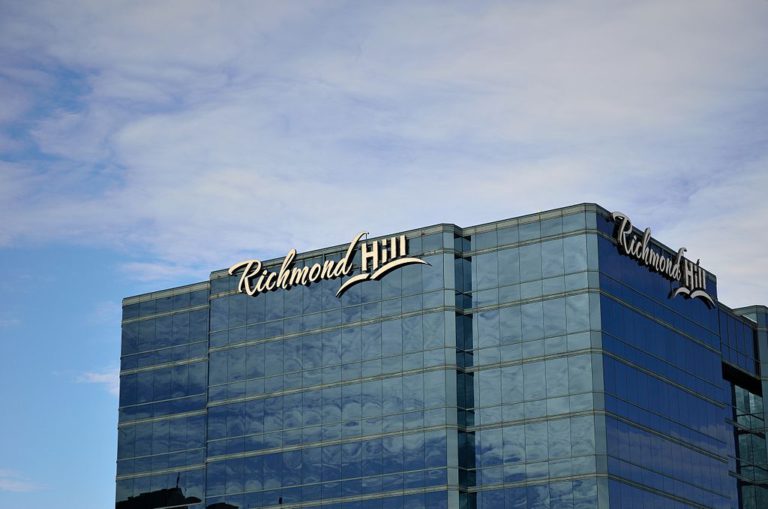 What to Look For in a Waterproofing Contractor in Richmond Hill

Many homeowners will experience water infiltration in their properties. This is commonly due to old and worn-out waterproofing and water-resistant insulation. However, owners can rarely

Issues That Come With Having Water in Your Crawl Space

The crawl space is an often-neglected area of the house, as it’s usually far from sight and mind. Even if you inspect the area, the

How to Clean Your Sump Pump

A sump pump is a hard-working piece of equipment that prevents your basement from flooding out. It diverts excess groundwater away from the house, stopping

Please fill the form below and we contact you as soon as possible to schedule a service call and provide you with an estimate.